Summer is around the corner which means one thing… ICE-CREAM SEASON! As the temperature rises take your ice-cream obsession up a notch with this insanely moreish, locally produced dessert.

Aussie Max Kordyl met Californian Andrea Young in Mexico. Although just friends at the time, the two shared a passion for travel and Southern Californian food. Re-uniting in Perth some years later, the duo fell in love and together hatched a plan to bring the flavours of America’s south-west coast to Western Australia.

Here’s the rest of the story:

How did the Piggy Food Co. come to be?

Andrea: The venue that we have now is a collaboration between Max and I, but the original pop-up restaurant was all Max. He’s a photographer by trade and also an amazing cook who’s travelled a fair bit through Canada and the States, and really fell in love with Southern Californian food, which is actually very hard to find here in Perth. In fact, I’m from Southern California and when I first arrived here I couldn’t find good tacos and beer anywhere.

Max realised there was this huge hole in the market and really wanted to give it a go using fresh, local produce. He started the pop-up as a way to gauge customer feedback before moving into a more permanent venue.

When did you open the permanent venue?

Andrea: The pop-up was running for around eight months. We rapidly outgrew that venue, which only seated 45 people squished together. We then had a bit of a hiatus for five months or so as we looked for a new venue. We opened in November 2015 (at 229A Queen Victoria Street, North Fremantle) with our permanent venue.

Now we offer a similar menu (as was offered in the pop-up restaurant) but it has been extended. We stick to the Southern Californian basics and offer menu items that are simple and fresh. We prep a lot of our items ourselves using fresh Southern Californian and Northern Mexican flavours like coriander, onion, garlic, paprika and so on. We offer tacos, rolls, burgers, salads, hot wings – really simple stuff. Oh, and our ice-cream sandwiches.

Speaking of which, who is the genius behind the ice-cream sandwiches??

Andrea: They were actually Max’s idea. Everyone thought he was crazy when he first wanted to make them. People were like, “that’s not a desert – you can’t sell people ice-cream sandwiches for desert.” But it seems they were wrong.

Max: The idea came from a trip to Bali with my brother. We went to an ice-cream shop and I wanted them to put the ice-cream on cookies instead of in a cone. I thought it would be pretty tasty. They did it for me, and it was! I came home, gave them a test run and people seemed to like them. Then, when I got to America I realised they were everywhere – they weren’t actually my idea at all! I started making them here and they’ve proven really popular.

What flavours do you now make?

Max: Our standard flavours are salted caramel, cookies and cream, chocolate, macadamia caramel and toffee and caramel. Sometimes we’ll make a sticky date pudding. We make our cookies in-house and we use various quality suppliers for our ice-cream centres.

In-house we mix up the flavours all the time and sometimes we’ll add little twists to the sandwiches. Last week we sandwiched vanilla ice-cream between peanut butter and jelly. We sometimes add Nutella and coconut to them, or we might use a salted caramel that we make in-house and then add white or dark choc to that.

What is your personal flavor and why?

Max: My favourite is the macadamia caramel simply because it’s just so good. It’s got a maple syrup sort of flavor.

Andrea: My favourite is anything with coconut and the macadamia caramel too.

What do you sell the most of?

Max: It’d be the cookies and cream or the macadamia caramel – they’re both pretty popular.

Pop in to The Black Truffle to try The Piggy Food Co. ice-cream sandwiches in Creamy Macadamia, Chocolate and Cookies and Cream. 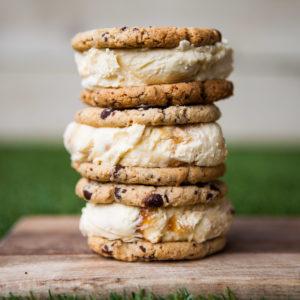