White winter truffles and black winter (or Perigord) truffles are the undisputed fungi kings, but do you know what separates one from another? Read on to find out.

Also known as the white Alba truffle, Italian white truffle, or Piedmont truffle, the scientific name for the white winter truffle is Tuber magnatum. A member of the mushroom family, they are only found in Italy’s Northern and Central regions, especially Piedmont, Tuscany and Marches, and grow underground near the roots of trees indigenous to these areas.

They are by far the most precious of all truffles – last year in Italy (the only place these truffles are known to grow) the price per kilogram reached over $AU9,000 – up $AU1,500 compared to five years ago.

Why are they so pricey? It’s all to do with the truffle’s scarcity and depth of flavour.

“There are a number of varieties of white truffle, like the white summer truffle, but many of these are close to worthless because they don’t taste like anything,” explains Dion Rangé, managing director of Stonebarn Truffles. “The holy grail is the winter white truffle. It’s got a really intense aroma and flavour, yet not a single white truffle has ever been successfully cultivated.”

“White (winter) truffle smacks you in the face and then smacks the back of your head out!” adds Al Blakers, owner of Manjimup Truffles and a pioneer of the Australian commercial truffle industry. “They only grow in the wild because no-one has figured out how to propagate them yet, but to be honest, I find the flavour way too strong. The black (Perigord) truffle is far more subtle.”

This truffle has an extremely pungent, musky aroma and earthy garlic-like flavour, which for the uninitiated can be quite overpowering. If you are fortunate enough to get your hands on these precious nuggets, try shaving it in moderation over simple, home-style dishes. Because of its intense flavour and aroma, this truffle is best enjoyed raw.

Despite their name, white winter truffles are actually light yellow in colour, and have a smooth exterior, more closely resembling a potato.

The black winter (or Perigord) truffle

Australians are likely to be more familiar with black Perigord truffles, known colloquially as ‘the black diamond of Provence’ and ‘black gold’, and scientifically as Tuber melanosporum.

“Over time, we’ve worked out how to inoculate the roots of the trees, then grow the trees and harvest crops,” explains Dion, whose 2,000-tree trufferie is planted with mostly with English oak.

The Perigord truffle is the most highly valued black truffle on the market (it fetches around $AU2,500 a kilogram) and is widely cultivated around the world. This year, Australia looks set to overtake France as the world’s largest supplier with demand outstripping supply (Al Blakers says almost all of his stock has been snapped up by French distributors this year).

Black Perigord truffles have a robust, earthy aroma and a nutty, mushroom-like flavour – it’s said black truffles can take on the flavour profile of the nut tree they are grown under. Their skin is knobbly and dark brown to black in hue, and when mature, the flesh is deep dark brown with white spidery veins running through it. 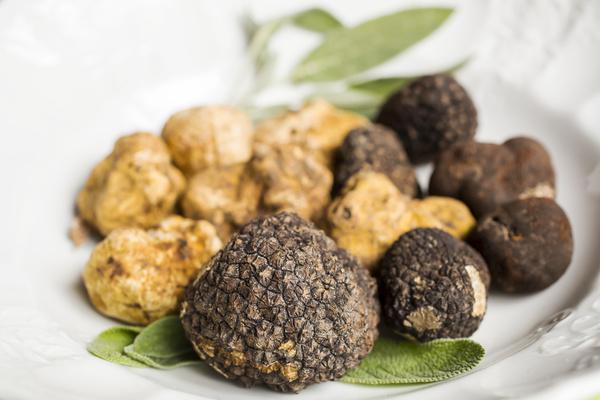 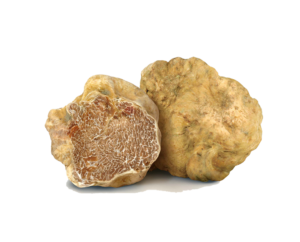 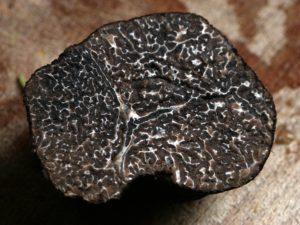 A black Perigord truffle, sliced in half.