The North Fremantle Amateur Football Club has been the lifeblood for many who call North Fremantle home. As it celebrates its centenary, we explore how the club has become the backbone of its local community.

During the First World War (1914-1918), there wasn’t a parent in the country eager to receive a knock at the front door. Yet during an era when no news was good news, the crestfallen face of a messenger, telegram in hand, greeted too many families across the country. The people of North Fremantle – then a tiny tight-knit industrial community – made as great a sacrifice as any.

“More than 600 husbands, sons and brothers volunteered to fight with more than 100 killed,” explains North Fremantle Football Club historian, Baden Pratt. “The football club lost 12 players and another 32 were wounded – with no players left to run onto the field, the club was forced to forfeit the final four games of the 1915 season.”

The war effectively ended an era of dominance for the club, which from 1901 to 1915 played in the WAFL, the state’s most senior level of football. But while they were down, the mighty Magpies were far from being out, thanks to the resilience and determination of a community in need of a happy distraction.

Take Mrs. White, for example, who lived on John Street and whose husband was a former club president. She received that dreaded knock on the door five times – six if you count the knock her pregnant daughter also received sharing the news her husband had been killed at war too. Yet, suffering unimaginable heartache, she joined with others in the community to re-establish the local football club.

“In 1921 the community rallied, meetings were held and locals agitated for their own local football club and today’s North Fremantle Football Club was formed,” says Pratt.

“Prominent at the time were the three Tetley boys. The eldest, Max, played for North Fremantle and then West Perth, and went on to captain a WA State team.

“Another brother, Laurie, devoted his life to the club. He became known as ‘Mr. North Fremantle’ because of his commitment to the North Fremantle Football Club. A star North Fremantle, East Fremantle and South Melbourne player, he went on to hold every position in the club from Patron, President, Secretary and Treasurer to Ground Manager.”

Gilbert Fraser, after whom the club’s home ground is named, was another important figure.

“He was the postal worker who was tasked with delivering the dreaded telegrams during WWI,” says Pratt. “He went on to serve as President of the club for 27 years and became a Cabinet Minister during the Bert Hawke Labour Government, running his office from the change rooms under the grandstand every Saturday morning to chat to locals attending the games.”

The newly formed club quickly became the lifeblood of the wounded North Fremantle community and remained that way until the early 1960s.

“Almost every social event, from dances to beautiful baby contests held in the North Fremantle Town Hall, were organised by the football club,” says Pratt. “On Sundays the club down at Gilbert Fraser Reserve was party central as Perth’s leading musicians, singers and stand-up comedy troupers descended on the club for the sly kegs of beer.”

But, as Pratt points out, it hasn’t all been glitz and glory down at ‘The Gil’.

“The club has fought against the odds, survived two world wars, a global depression, two pandemics (the Spanish Flu and COVID-19), and the agonising events of 1960-61 during which time a number of factors harmed the club’s standing as the social and economic hub of the community.

“At the same time, the WAFL introduced a Thirds and then a Fourths competition, meaning the young, talented host of young recruits dried up.

Despite this brief downturn, the North Fremantle community retained its spirit and spread its wings to source players from the wider community. In doing so, it managed to build an even stronger, larger club. Today, it is people like club president, Tony Misich OAM, and A-grade coach and former Brownlow Medallist, Shane Woewodin, who are driving the club’s success – firmly back in the A-grade competition, NFFC also fields four senior teams and two colts teams among others.

Plenty of champions have run onto ‘The Gil’, donned in the mighty Magpie’s traditional black and white, but despite the successes (too numerous to list) 100 years on, North Fremantle’s fallen soldiers remain at the club’s heart. Take the annual ANZAC Day service, for example, held each year at the North Fremantle Fallen Soldiers Memorial.

“The North Fremantle Fallen Soldiers Memorial was one of the first memorials built after World War I and was primarily funded by the people of North Fremantle. The women, led by Mrs. White, went door to door collecting money. They held fetes and cake stalls, all to raise the initial funding, which was later contributed to by the Government,” says Pratt.

“The football club decided some years ago that it was their duty to honour the soldiers’ memory, so every ANZAC Day at 9am, outside the old North Fremantle Town Hall, the football club combines with the North Fremantle Primary School and Fremantle City Council and about 1000 members of the local community to celebrate these men. It’s a very moving ceremony.”

The club’s commitment to its local community is also central to its enduring success. Community Day, for example, is a family event with food trucks, petting farms, stalls and friendly competitions that now attracts thousands of visitors.

The annual Derby luncheon, which has long outgrown its days in the clubhouse, is now hosted in Crown’s Grand Ballroom making it a not-to-be-missed networking opportunity for club members and business men and women across the city.

Gilbert Fraser Reserve and its historic grandstand, lovingly maintained by the football club, remains central to much of North Fremantle’s community activity, from the locals who socialise at the club and watch the games, through to the dragon boaters, cricketers, soccer players, gym-goers and dog-walkers who all enjoy one of the most impressive recreational grounds the city has ever known.

“Right now, 100 years after those people first held that meeting at the old Gresham Hotel (now a residence, the hotel sat opposite Gilbert Fraser Reserve), the club is stronger than it has ever been. It’s a fantastic local history story that’s all about endeavour by a community. There have been superstars come out of the club, sure, but the depth of the involvement, the mateship and the way of life down at the club is just phenomenal,” says Pratt.

“At the end of the day, when you stand on the verandah of the Gilbert Fraser Reserve clubhouse during an A-grade game in the last quarter when you’ve just hit the front – you know you’re at a football game. It’s just fantastic.”

Keen to support the North Fremantle Amateur Football Club but not interested in joining a team? Social memberships are available and all new members are welcome. Alternatively, you can show support by attending one of the annual social functions. Find a calendar of events and more information at northfreofc.com. 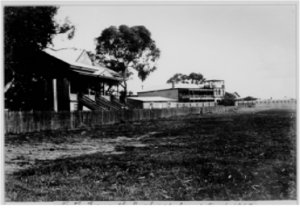 The North Fremantle Oval in early 1900s shows the iconic grandstand, with the Press Box next to it and the Gresham Hotel at the far right with its lookout tower occupied by the NFFC committee during home games. 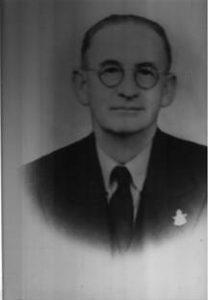 The late Gilbert Fraser MLC, president of the NFFC for 27 years and has the ground named after him. 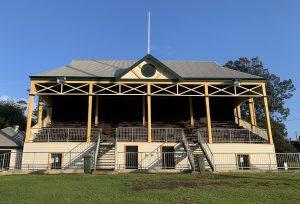 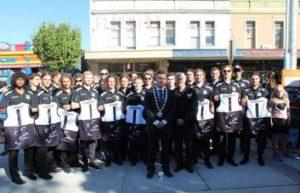 The North Fremantle Colts hold up named jumpers of the World War I footballers killed at Gallipoli and The Western Front, photographed with the Mayor Brad Pettit at the North Fremantle Fallen Soldiers Memorial.