The Story of Christmas Ham

Dating back to the days before Christ, the Christmas ham has long held pride of place on the Yule Tide table. Here, JESSICA ZOITI explores this traditional holiday offering.

Forget the turkey. In my family, it’s ALLLLL about ham on Christmas Day. These days – thanks to The Black Truffle – ours is a freshly baked masterpiece that oozes with a home-made sticky glaze. But this hasn’t always been the case.

Before taking things up a notch, Dad would buy a processed chunk of ham and serve it cold with an array of mustards and horseradish. He’d then refrigerate it in a damp pillowcase, whittling it down to the hock over days before reluctantly relinquishing it to the pressure cooker where it would be reincarnated as pea and ham soup.

As a child, mum recalls hams of the 1950s being baked in a brown sugar glaze and then studded with cloves, and maraschino cherries positioned in the centre of canned pineapple slices.

But in the humble ham’s history, this mid-century fad is actually quite modern. According to legend, pagans have been celebrating with ham since well before Christ, sacrificing wild boars to the Norse God, Freyr.

Following Christ’s death and the conversion of many pagans to Christianity, the meal became linked to St. Stephen, who’s traditional feast day is December 26. The convergence of the two traditions gave rise to what we now refer to as Christmas ham.

So what is ham, exactly? In a nutshell it’s pork – typically from the swine’s hind leg – that’s been preserved through salting, smoking or wet curing.

Here’s what else you should know:

A well-baked ham is a guaranteed Christmas lunch crowd pleaser and is not as intimidating as it may seem to prepare.

Firstly, pretty the ham by scoring the rind.

Then, if you’re going to decorate your ham (a la Mum’s 1950’s Christmas throwback), now’s the time.

To enhance the flavour of your ham, a glaze is essential. Place your scored and possibly decorated ham on a rack then generously douse the surface in your chosen glaze.

Finally, bake the ham ensuring you pause the cooking process frequently to re-glaze.

RATHER LEAVE IT TO THE EXPERTS? The Black Truffle’s Christmas hams are second to none. Available in two sizes – mini (4-4.5kg) and family (6-8kg) – our whole semi-boneless WA leg ham is scored, glazed and baked to perfection. Choose from our three house-made glazes: 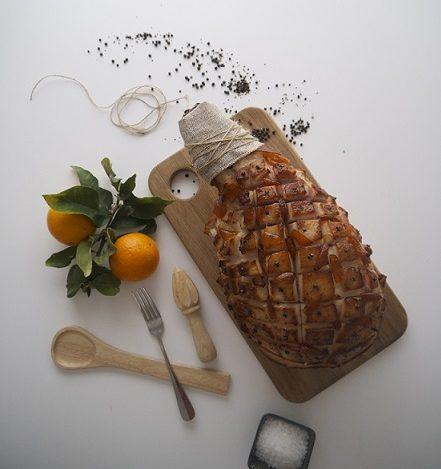