Top of the pops!

If you’re yet to try the Delish Ice range of fruit icies and ice creams, make your way into The Black Truffle lickety split!

Here, company founder Katie Earl explains what makes her popsicles so much better than the average supermarket-variety frozen treat.

TBT: How did you find yourself in the popsicle business?

KE: It’s a long story, really! I finished my degree, then travelled around, unsure of what to do next. I returned from working in London in 2008 and started working with my family in our land development business, but I was always coming up with hair-brained schemes. Nothing really stuck then in January 2011 I was inspired by the front cover of a Donna Hay magazine, which had popsicles on the front cover. I felt that there was no-one making a gourmet, artisan ice pop (like those on the cover) commercially in WA or even Australia at the time.

So I had the idea during the summer of 2011 and I then spent the next six to eight months during the cooler part of the year putting together a feasibility and working out if I could turn it into a full-time business. I started testing recipes and buying equipment, and then I launched in November 2011. In the meantime, I found this cute little caravan that I could sell out of. It needed to be renovated, so I did that in that whole vintage style.

TBT: So where did you start selling your ice pops?
KE: I was very much focussed on becoming an events business. For me the pops had to be amazing, but it was also about the whole experience around them – the vintage caravan had a very memorable look to it, we played music, there was a bubble machine and we got dressed up in vintage attire, and really focussed on offering really lovely customer service.

At the time I was living at home in Cowaramup (Katie is now based in Perth) and my very first event was the Margaret River Farmers’ Markets. By chance, or perhaps through dumb luck, I started this business at the same time the whole food truck movement was taking off in Perth. I was living in my own little bubble down in Margaret River and not really aware of what was going on up in the city, but after running events in Margaret River I began doing more and more events up in Perth.

TBT: When did you start retailing into businesses like The Black Truffle?
KE: Only recently. We weren’t set up to (expand) properly. For example, we didn’t have the lovely packaging we do now. That’s new this year, but I wish I’d done it sooner! I was always very conscious of properly translating the whole retro experience we were offering into a freezer display. I wanted to make sure that I did it right.

TBT: What were your original flavours?
KE: When I first started I was a lot more experimental because it was easier to make small batches and play around with flavours. Many of the flavours we have now are the ones that we found people regularly asked for, like ‘raspberry and lemonade’, and ‘watermelon and lemonade’, both of which we regularly ran out of.

Because we’re so customer facing – sometimes we attend 15 events over a weekend – and we’re often giving samples away and seeing customer reactions, we’ve been able to really hone down the flavours that people respond best to. On one hand I really want to be innovative but at the end of the day people have their favourites, and that’s fine!

TBT: So how many flavours do you produce now?
KE: Off the top of my head, around 15 standard flavour including eight fruity flavours and another eight creamy flavours. We have a pup-sicle for dogs in a sweet potato, apple and raw hide flavour, and there are a couple of sugar-free pops too. We also do a lot of bespoke, one-off requests (this can be done via the website, delishice.com.au).

The good thing about our business is we can respond well to the seasons. As winter progresses we’d suggest to businesses they stock more of the creamy, dessert-style flavours and then in summer you move your focus to the fruity refreshing flavours, which sell very well.

TB: We’re big fans of the ‘ginger beer, mint and lime’ pop. What’s your favourite?
KE: Can I choose a few (laughing)?

TB: For sure!
KE: Originally my fav was ‘basil and elderflower’ – it’s very good with a gin and tonic at the end of a hard day. We started making ‘lamington’ flavour a few years ago. I love coconut, and that (ice cream) is a delicious creamy coconut dipped in dark chocolate. This year we introduced a creamy ‘coconut pandan’ flavour with pandan jelly and fresh coconut meat. And then in the last six weeks we’ve created a ‘cherry and coconut’ (ice cream) dipped in chocolate, so it’s like a cherry ripe. It’s so good.

Where to find them
The Black Truffle stocks nine of Delish Ice’s artisan ice pops including ‘basil and elderflower’, ‘raspberry and lemonade’, and ‘ginger beer, mint and lime’ fruity popsicles, and ice creams including ‘cookies and cream’, ‘coconut pandan’ and ‘lamington’. They retail for $4.50 each. Find them in the Delish Ice fridge in store now! 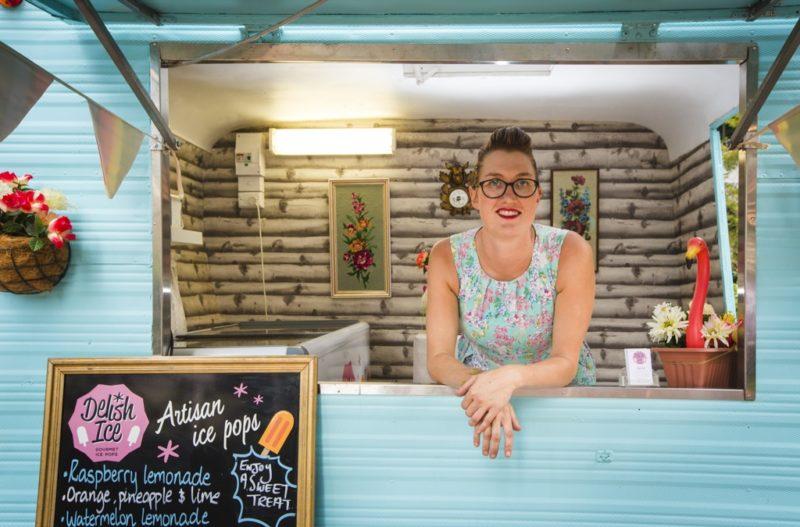 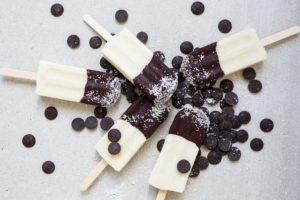 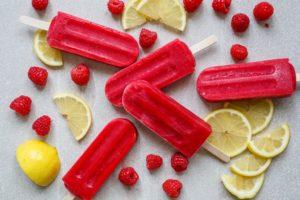